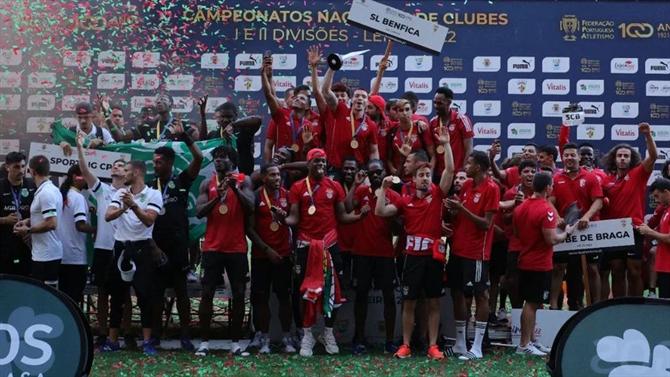 Benfica was consecrated, this Sunday, double champion (12 times in a row) of national athletics.

The red athletics team reached 147 points, adding the scores from Saturday and Sunday, in the competition that took place at the Estádio Dr. Magalhães Pessoa, in Leiria.

The eagles finished with the same score as Sporting, but it was Benfica who won the title in the tiebreaker in the individual competitions (12 against 7 for Sporting). In third place, SC Braga, with 100 points.

“Our goal is always to win, but today [domingo] it was a day to win in a special way, for everything that happens off the track and we showed, on the track, that we are the best, even when things are not going well for us. We had an equal record of Professor Moniz Pereira’s time, with Sporting. After 12 years, we broke this record. I am very proud and grateful. It was not 12 years, but 17 years of struggle and conquest that awaited this moment. It took a lot of hard work, investment and resilience from Benfica. Benfica and athletics deserve it. Fortunately, Benfica and also Sporting have managed to raise the athleticism they need,” said Ana Oliveira, coordinator of the Luz club section.