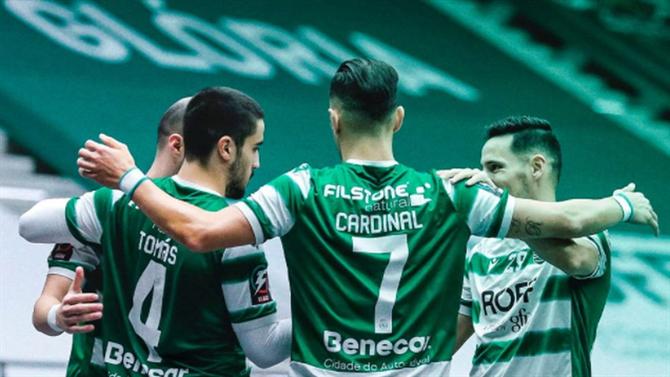 Sporting is in the final of the play-offs of the national futsal championship, after beating Fundão, by 5-2, in match 2 of the semi-finals, played this Sunday afternoon, at the Pavilhão João Rocha, in Lisbon.

The lions entered at full speed and at 11 seconds (!) they were already in front of the marker: the shot from Diego Cavinato and Iury Bahia, unfortunately, deflected it into its own goal. Leonine supremacy came to fruition again soon after, in the 6th minute, when Fernando Cardinal from close range made it 2-0. Fundão still managed to react and reduce the disadvantage, thanks to Felipe Leite, but Sporting would increase the discord even before the break, thanks to Esteban Guerrero.

In the second stage, and giving shape to the theoretical favoritism that was signaled to it – this despite the good reply from Beira -, Sporting widened the difference even more, with goals from Fernando Cardinal and Pauleta, with the goal from Nem, already close. In the end, this only served to dampen the numbers from the Fundão debacle.

The tie is thus resolved – the Leonine team, it should be remembered, had already won match 1 (6-4), last Friday, in Fundão – and Sporting are now waiting for the opponent they will face in the final of the play-offs and who will come out of the duel between Benfica and Eléctrico – to play this afternoon (5:00 p.m.), with Benfica in the lead, by 1-0, following the victory (2-1), also last Friday, at Ponte de Sor.

39 minutes: Felipe Leite, in a good position, shoots the right post of the leonine goal.

38 minutes: Long shot by Mário Freitas and stop by Gonçalo Portugal for a corner.

Technical break requested by Nuno Couto, coach of Fundão. Led 2-5, just under three minutes from the end, it is very likely that the emblematic coach Beira will opt for the 5×4.

38 minutes: powerful shot from Alex Merlin, slightly above the bar.

36 minutes: Guilherme Duarte, after having thwarted Diego Cavinato’s marking, fires a cross, the ball coming out near the left post of the goal now defended by Gonçalo Portugal.

36 minutes: Shot by Diego Cavinato for a good save by Paulo Pereira.

33 minutes: Fernando Cardinal crosses, looks for Caio Ruiz, at the far post, but David Gomes, on the line, makes an excellent cut for a corner.

32 minutes: Shot by Mário Freitas, the ball deflects on Fernando Cardinal and hits the right post of Guitta’s goal again before going out for a corner.

31 minutes: Frontal strike from Pany Varela, but David Gomes manages the deflection for a corner and prevents another goal from the greens and whites.

29 minutes: Sports results! Excellent collective play from the lions, with Pany Varela sending the ball to Esteban Guerrero, the Spaniard offering the goal to Pauleta on a golden platter. 5-1.

28 minutes: Excellent work by Bebé on Pany Varela, on the right flank, with the shot from winger beirão returned by the crossbar of Guitta.

27 minutes: Pany Varela, leaning against the line, on the left, tries his luck, but the ball grazes the bar before going out.

25 minutes: The long shot from Bebé and Guita, with yet another extraordinary intervention, deprives the Beiras of a second.

24 minutes: Nem passes and Peleh shoots at the left post of Guitta.

23 minutes: Sports results! Aerial ball from Alex Merlim and Fernando Cardinal, at the far post, without dropping the ball on the ground, he scored first to make it 4-1.

21 minutes: Shot by Iury Bahia for an excellent defense by Guitta for a corner.

21 minutes: Shot from Nem, the ball bounces off Pany Varela and hits the right post of Guitta’s goal.

Beginning of the second part!

The lions come into half-time with an interesting two-goal advantage, built on a quality first half by Nuno Dias’ men, far from the spectacularity of other meetings. Fundão also made for life, as evidenced by the goal he scored after losing 0-2, but the feeling that remains from these first 20 minutes is that Sporting have completely controlled the operations, which is why he arrived, shortly after, the third goal, getting a comfortable cushion on the scoreboard.

Nothing is decided yet, of course, but the emblem of Beira will have to improve in the second half to try to reverse the course of events and prevent Sporting from printing their presence in the final of the play-offs today.

19 mins: Kutchy, after a quick transition, shoots for Guitta to save.

17 minutes: Counter-attack led by Nem, the well-placed shot from the Brazilian being stopped by an excellent intervention from Guitta.

16 minutes: Frontal shot from Rui Moreira for the cautious defense of Guitta.

15 minutes: Iury Bahia, at the entrance to the surface, tries the first shot, but the ball goes over the bar of Guitta’s goal.

14 minutes: strike from Pauleta, on the right flank, for the cautious defense of Paulo Pereira.

13 minutes: Sports results! Alex Merlim’s shot hits the post, but Esteban Guerrero left-footed to make it 3-1 on the rebound.

12 minutes: Paulo Pereira, in a foray into the attack, shoots for the defense of Guitta.

11 minutes: Strong and well-placed shot from Alex Merlim, after avoiding Nem’s mark, but Paulo Pereira makes an excellent intervention and deprives the lions of the third goal.

8 minutes: Fundão scores! Col de Kutchy and Felipe Leite, in the center of the area, slope for 2-1.

7 minutes: Assisted by Fernando Cardinal and Pauleta, with a heel kick, passes the ball very close to the left post of Paulo Pereira’s goal.

7 minutes: Cross shot from Pauleta, in the side net of the goal, now guarded by Paulo Pereira.

Fundão goalkeeper Luan Muller is injured. The Armenia international is being assisted off the pitch and the question remains whether or not he will be able to recover in time to make his contribution to the team again in this game. Meanwhile, Paulo Pereira is now defending the Beiras goal.

6 minutes: Sports results! The free kick from Erick Mendonça and Fernando Cardinal, at close range, deflects it to 2-0.

6 minutes: shot by Bebé, near the left post of Guitta’s goal.

1 minute: Sports results! After only 11 seconds, a cross from Diego Cavinato and Iury Bahia, in the center of the box, unfortunately deflects him towards his own goal. 1-0.

There are already teams!

Jorge Braz, national coach, is at the João Rocha pavilion to follow the match between Sporting and Fundão live.

For this afternoon’s match, Nuno Dias left out Bernardo Paçó, Tomás Paçó, Zicky Té and Waltinho. Nuno Couto, on the other hand, cannot count on Thalles, who is injured and will not play again this season.

And it is good not to forget that this Fundão has already beaten Sporting in the current season: still in the regular phase, the 4th round was played, the beirão emblem beat the lions, by 4-2, during a match played in October. February 23, 2021. In the second round, the story was different, with Sporting taking the best (6-3), at Alvalade, in a 17th round match, played on March 5, 2022.

The leonine emblem comes to this match leading the draw, having won match 1 (6-4), which was played last Friday, at the municipal pavilion of Fundão, in what was, remember, one of the most spectacular matches in Portuguese futsal throughout the season. Following this triumph, Sporting can guarantee, today, a place in the play-off final, simply by beating Fundão again. But the beirões, as they demonstrated in the game the day before yesterday, promise to again create many difficulties for the lions to force the black – which, if that happens, will be played next Thursday (7 p.m.).

Sporting host Fundão this afternoon (3 p.m.), in game 2 of the semi-finals of the national futsal championship play-off, in a match that will take place at the Pavilhão João Rocha, in Lisbon. BOLA Online will follow all incidents of this duel and as such, come from there, dear reader. You are invited to be part of our team…