Without McDonald’s, Russia upsets the M and creates a copy only with domestic products

Putin is angry and wants to punish Western brands. First step: create hamburgers like the Americans. 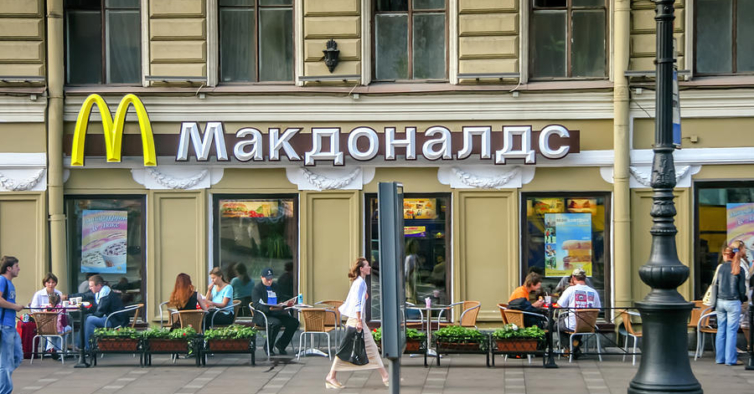 War is also fought on the plate

Russian bread. Russian meat. Russian pickles. On the entrance sign, the famous M of the golden arches has been reversed and now appears as a B. On the packaging it now reads Дя́дя Ва́ня, Uncle Vanya for those who have not yet completed the Cyrillic course.

This is the idea of ​​the Russians to circumvent the temporary closure of more than 800 stores of the American fast food chain. In the pipeline is the creation of an all-Russian alternative with what appears to be an unabashed copy of McDonald’s iconic logo.

In recent days, an application for registration of the Tio Vanya brand has been filed with the government departments. In this same application, the possible logo is presented, which is nothing less than the famous stylized M, but turned at 45 degrees, to form a B. This B symbolizes the V of Vanya — which in the Cyrillic alphabet looks like to our B.

Why Uncle Vanya? Interestingly, the name refers to a play by Russian playwright Anton Chekhov, published in 1898 and first performed on stage in 1899, precisely in Moscow.

This could be the first step in Russia’s response to boycotts by major Western brands, which have closed their businesses in the country, in protest against the invasion of Ukraine. It was Sergei Sobyanin himself, mayor of Moscow, who declared that the 250 restaurants of the American chain in the city could be occupied by a similar chain, but created and managed by Russians.

Regarding the possible rights to McDonald’s brand image, it is unlikely that the Russian authorities and courts will follow up on a complaint by the multinational. For Sobianine, it would even be preferable to get rid of the Americans, so that the new chain can bet on Russian ingredients. And he left a promise of financial support for national fast-food chains.

On March 12, the trademark application was filed for the McDonald’s logo with the words “Uncle Vanya”.

The Russian State Duma had previously suggested that Russia would replace all McDonald’s with “Uncle Vanya’s”.

The wish was also echoed in the Russian parliament, with some deputies reiterating the same desire to see Uncle Vanya take the place of McDonald’s. “The occupation of trademarks has just started in Russia,” commented on social media Josh Gerben, a well-known lawyer who was among the first to reveal the Russian intention.

According to the New York Post, the Russian government is also in the process of removing all patent protections from companies it has identified as hostile to Russia. Vladimir Putin has already shown that he has the courage to move forward, this after having refused the request of Western companies to return planes loaned to Russian companies.

Putin will have decided to save the hundreds of planes, a way of marking a position against sanctions and boycotts. The new battlefront of fast food and patents is just one of the few ways the Russian government has to fight back.

However, McDonald’s has yet to officially comment on the attempt to copy its brand image.